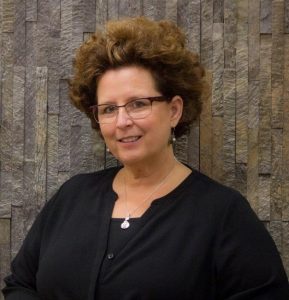 Devon Thron (maiden name) Christianson’s passion for life is readily apparent by her enthusiasm and positive energy in attacking any job. It is reflected in her work, in her willingness to study new technical and complex processes and her continual effort to seek and adopt new ideas.  As Director of the Aging and Disability Resource Center of Brown County (ADRC), Devon’s passion for people is shown by her strong commitment to offer the best services she can for our community’s most vulnerable people: seniors, adults with disabilities and their caretakers, and in her management style that focuses on individual development by encouraging each staff member to build on his/her strengths.

Devon was born in 1963 in Lincoln, Nebraska to a family with strong feelings about education.  Her grandmother, a first generation German whose own mother had only an eighth grade education, was encouraged to and did graduate from Lawrence University with a degree in education.  She soon learned that she could not marry and teach, so she delayed marrying in order to teach.  Finally, she married and had three daughters.   She not only encouraged her daughters to pursue higher education, but also supported all women through her work as an active and proud member of AAUW in the Racine, Wisconsin branch.

Devon’s mother had a full scholarship to Emory University to study medicine.  Her uncle, a physician, discouraged her from pursuing medicine, stating that her training would be wasted when she left practice to raise children.  She did pursue a degree in sciences and continued her education, through a Ph.D., while she raised a family modeling a commitment to career and family.  Devon’s parents moved to Green Bay where they became some of the initial professors at UWGB.  Her life and that of her siblings, an older sister and younger brother, was driven by the academic calendar.  Each summer her parents would teach summer school at a college in a different city.  The family would live in the school’s dorms.  Devon and her siblings, thought these summers were great adventures.  They could look and live like college students and had lots of halls within which to roam.

Devon got her degree from UWGB in human development and in gerontology in 1987.   She continued graduate studies in Administrative Sciences at UWGB, doing additional course work at the Scripps Gerontology Center at Miami University, Oxford, Ohio.  Her first job was as a Senior Center Director in Pulaski, and then moved to a regional grant administrator position, a nursing home social worker and a hospital transition coordinator before solidifying her career path at the Aging and Disability Resource Center.  She met her husband when  they worked together at a local nursing home when she trained him as a new employee.  They were married in 1995. Together they have three boys that include a set of twins. She worked part-time at a number of different places while the children were young.

Devon started at the Aging Resource Center (now ADRC) in 1990 and became Director in 2012. For more than 20 years, Devon was responsible for providing direct services and the development of the Information and Assistance Program.  During that time the ADRC, as well as, Wisconsin’s long-term care system, expanded and changed dramatically. The transformation of the ADRC from an Aging Resource Center to an Aging and Disability Resource Center required gaining  expertise in many new program areas involving complex processes and technical information, multiple new certifications had to be obtained, and required learning many new software programs. Devon spent hours learning the new information, developed the trainings and materials staff needed to make their jobs easier and enable them to provide quality services.  Devon devoted many extra hours developing policies and procedures and other materials that have served as models for the rest of the state.  Under her guidance, Brown County was recognized as leader in the state and was awarded the first State of Wisconsin Service Excellence and Aging Leadership “SEAL” Certification.

Devon is firmly committed to collaboration. She has the patience, respect, and commitment needed and has been willing to take the time to develop successful partnerships.  She has served on a number of community and state-wide committees addressing community and state-wide issues that impact seniors and adults with disabilities.  An example of Devon’s influence is her work on the United Way’s 2-1-1 program.  When the program was first being developed, there was an opportunity to assure partnerships in the community among 2-1-1, ADRC and Crisis Center. They could model a new way to collaborate on one community resource database and call response for local customers looking for help and connection to local resources. Through Devon’s advocacy the databases were combined and the community now has a single accurate, current and comprehensive human service resource database.  For her direction and inspiration, she was presented the United Way “Shining Star” Award for this community partnerships project. Other examples of collaborations include:  State of Wisconsin Long Term Care Council, Elder Watch Committee, ASERA Care Foundation Committee, Wisconsin AIRS Board, United Way Impact Council,  Bay Area Community Council, Foundations Health and Wholeness

Board, and the Alzheimer’s Association Board.  Through this work Devon has helped to shape and reform aging services and long-term care systems.

While clearly recognizing her path was made easier by those women who had taken on new challenges, Devon acknowledges that a woman leader, despite her accomplishments, is not always taken as seriously as a man.  Devon believes women lead differently than men.  In order to accomplish the wide variety of tasks demanded of women, they have had to learn to be flexible, balance the needs of those around them, influence through hard work and vision. They are more interested in seeking common ground and can more easily express care about the people around them.  She tries to foster a sense of belonging through teamwork and an atmosphere of trust and fun.  Devon encourages her staff to work in areas that interest them and allows them to build on their own strengths.

Devon is proudest of her work as an active partner with the state leadership in securing two significant federal grants. The first grant developed an evidence-based program which demonstrated the success of incorporating Motivational Interviewing within Options Counseling.  The second grant developed state and national standards for Options Counseling.  Brown County was chosen for this grant because of its top-ranked position in the state’s quality review process.   This work did not go unrecognized and others in the field looked to Wisconsin as the national model.

Given her family history, Devon was not surprised how she loved teaching. Her passion for her work and her reputation for excellence led to numerous presentations for state-wide and national conferences. Many states have asked her to their state aging conferences and New Mexico sent a team to the ADRC to learn about the successful implementation of the ADRC concept.  She has also been an adjunct lecturer at UWGB’s Social Work Department.  Within the ADRC, she has organized training sessions to prepare staff for the AIRS international certification.  She developed and offered a state-wide study session to assist individuals in other organizations to prepare for this certification.

Devon is passionate about her life, her family, her work and her community.  While a hard worker, she finds time for her family and her own interests.  She believes in leading by example and when one empowers a person, that person will pass it on.  When her staff was asked to describe Devon in one or a few words, they said: “Brilliant, hard-worker, dedicated, compassionate, kind, caring ,wise, gifted teacher, energetic, approachable, empowering, charismatic, affirming, creative and boundlessly resourceful – A one of a kind person that you do not find often.”