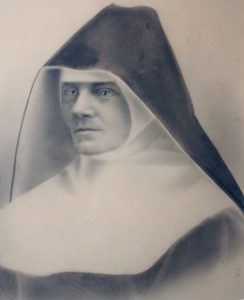 Adele Joseph Brise was already 24 when in 1855 her parents decided to emigrate to Wisconsin. She had begged them to let her stay in Belgium to become a religious instructor of poor children. Adele’s village priest had counseled her to accompany her parents, adding that if God so willed, Adele could become a “sister” in Wisconsin. So, Adele had accompanied her family to the Belgian settlements northeast of Green Bay. There she shared in their back-breaking work of extracting a living from a wooded wilderness.

Then one day in early October 1859, Adele’s mundane life would change. She experienced three visions from a “beautiful lady in white.” The lady asked Adele to teach the children. The illiterate Adele demurred, “How shall I teach them who know so little myself?” The lady (the Blessed Mother) responded, “Teach them their faith.” Thus, Adele began traveling among the Belgian families working for them in return for teaching the children their catechism.

This went on for over seven years when a new priest at Bay Settlement suggested that instead of traveling the wilderness to the children’s homes, Adele should have the children come to her for instruction. Thus, was born the idea of building a school (1867) near the site of the visions, where a frame chapel already existed. The priest also suggested that Adele recruit others to help teach the children. Thus, was born the Sisters of Good Help and including a convent with the school.

(Although Adele and her helpers wore habits as they taught the children and begged for money, they never took vows to any order of nuns. Rather they were third order tertiary, who were lay people who were linked to a specific religious order—in this case the Franciscans.)

The miracle occurred in October 1871—almost twelve years to the day after Adele’s first vision—during what became known as the Peshtigo Fire. The wind-driven flames were fast approaching the chapel compound with its wooden frame school and chapel. Carrying a statue of the Virgin Mary, Adele led the children and others who were fleeing the fire around the chapel grounds, praying that they might be spared. Then just before the fire reached the compound, it began to rain on the five-acre site! Their prayers had been answered.

Today science has learned that rain can sometimes accompany wildfires naturally. But to the eye witnesses who experienced that downpour in 1871, it must have seemed a supernatural event—a miracle in response to Adele’s prayers. (Still, in 1885, the wooden buildings were replaced with brick ones.) Today one can see a number of old crutches in the crypt underneath the church. These attest to other miraculous cures that took place at the site.

Adele managed the chapel, school and convent for over thirty years. After 1890, her health began to deteriorate. She died on July 5, 1896. Her body is buried along the side of today’s church, The Shrine of Our Lady of Good Help, which is nestled between two farms on Brown County K just east of Champion in Brown County. Adele’s will left the five-acre compound and buildings to her two assistant “sisters.” It eventually became the property of the Green Bay Diocese.

In just 35 years, illiterate immigrant Adele Brise had created an educational establishment out of the wilderness. Even if one is skeptical regarding Adele’s visions and the supernatural help of the “lady in white,” today’s chapel buildings still attest to her rather miraculous accomplishments. Adele was, indeed, a dreamer and a doer.