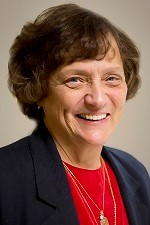 Sister Melanie Maczka, a member of the Society of Sisters for the church, began her work among the Hispanic population of Green Bay in 1982.   She began as an associate at St. Willebrord Catholic Parish in downtown Green Bay.   She became the founder and executive director of Casa ALBA Melanie, a Hispanic resource center offering resources and assistance to a population that makes up more than ten per cent of area residents.  She continues to serve as director of Casa ALBA (Association de Latina Bienestar (well-being) y Ayuda (assistance)).

Sister Melanie received her undergraduate degree from De Lourdes College of Chicago, Illinois.  She served as a junior high school teacher at St. Margaret Mary School in Neenah, WI.  She then sought a MA in Religious Studies from Fordham University.   Upon completion of her degree, she returned to St. Margaret Mary Parish as Director of Religious Education.  The Diocese of Green Bay invited her to become a Religious consultant and in the 1980s she came to St. Willebrord.  In 2008, a raid in Iowa on a chicken processing plant by U.S. Immigration agents elevated fears among the Hispanic population of Green Bay to necessitate the start of a 24-hour hotline for the community.  This was in existence for three years.  In 2011, Casa ALBA was incorporated and then opened its doors the next year.  Through Casa ALBA Melanie, St. Margaret opened dialogue with over 50 agencies and introduced programs in education in collaboration with Northern Wisconsin Technical College, U. W.-Green Bay and the School of Menominee Nation.  She has made arrangements for regular legal consultation in immigration law, civil law and law on the local level.  She established support groups for elders, youth, parents of children with disabilities and college bound students.

In addition to this signature work, Sister Melanie Maczka has served on boards of directors of the YWCA, Aging and Disability Resource Center, Connecting our Community of Brown County, Migration Advocacy Committee, as well as, being in charge of the Leadership and Ministry Program in Spanish of the Diocese of Green Bay.

As head of Green Bay’s Hispanic resource center, she was honored by the Mexican government for her work helping immigrants integrate into American society.  Sister Melanie Maczka received the prestigious Ohtli award during a ceremony in Chicago in September of 2015.  The annual award, which translates to “pathway”, recognizes individuals who have contributed significantly to the prosperity and empowerment of Mexicans abroad. The award confirms how important Casa ALBA has become for the nearly 21,000 Hispanics living in Brown County, said Maria Berouin, a member of the organization’s board of directors.

When asked about the greatest influence on her life, Sister Melanie responded.  “My mother taught me that women should not accept limits…anything is possible.  Also, Father Ken DeGroot taught me leadership, to take risks and to listen.” She expressed her joy in helping people discover their gifts and using those gifts for the community. “I would like to be remembered for having had the great opportunity and privilege to be welcomed so warmly and deeply by the Hispanic community in Green Bay.”