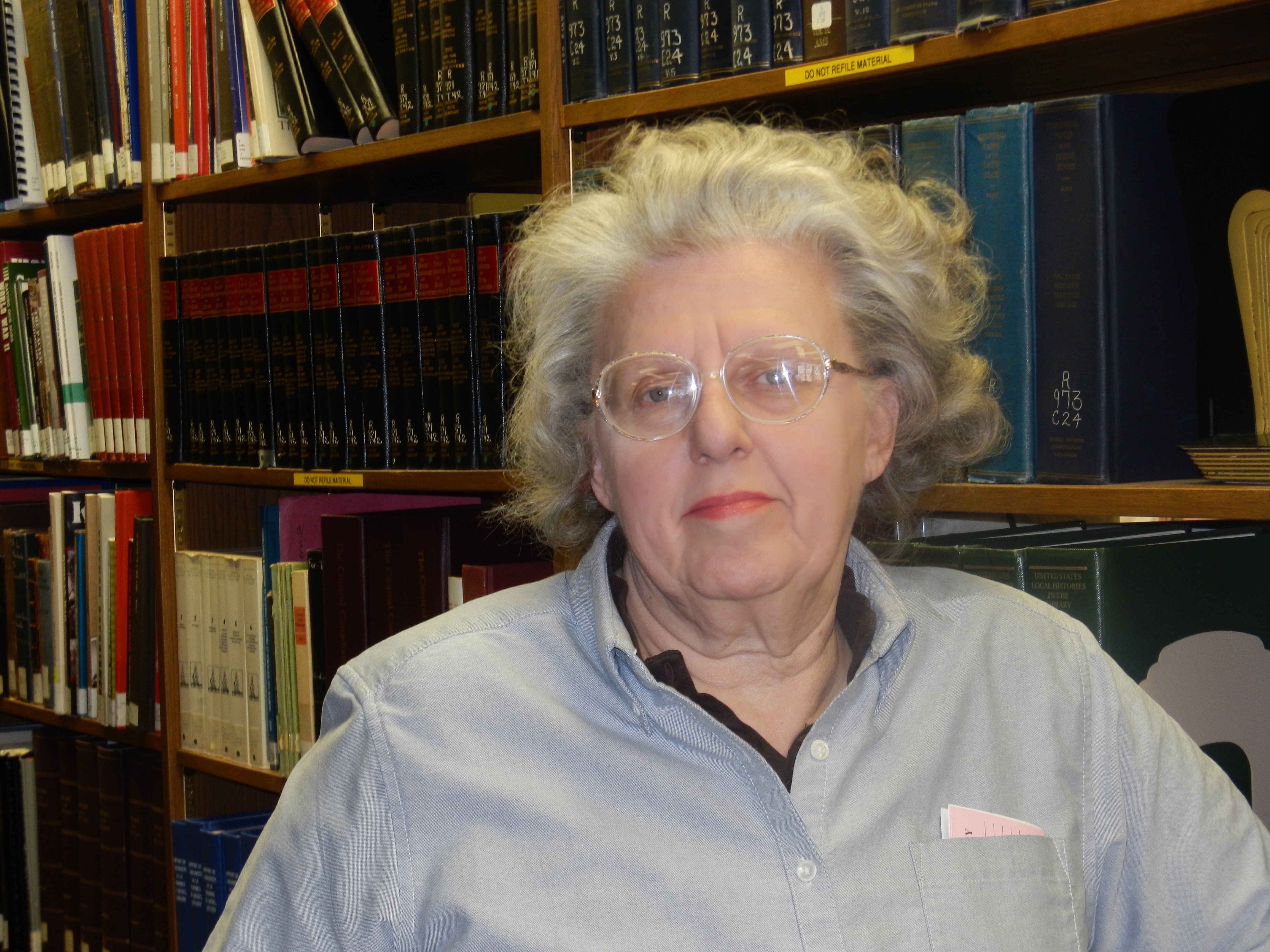 For the last quarter of a century, Mary Jane Herber has become known as the local historian and genealogist for Brown County.  She was born in 1950 and raised in De Pere in the Van Da Huvel family.  She recalls, as a girl, watching a TV show on Sundays about history known as “The Twentieth Century”. This sparked what became a lifelong love of history.   This was manifested in her involvement in helping to produce for WI Public Television the Green Bay edition of “Wisconsin Hometown Stories.”    At age 20, she became the youngest board member of the De Pere Historical Society.  Mary Jane received her B.A. in History from the U.W. Green Bay.  On August 1, 1973, she began her career working in the Brown County library system, and in 1974 she became Local History and Genealogy Librarian at the newly opened Brown County Central Library, located downtown Green Bay.  During her tenure (which continues to this day) she was able to grow the library’s collection of historical books and documents from 300 to 10,000 volumes.  This collection begun by Deborah Martin, the second librarian of what was then the Kellogg Library, now contains some of the rarest books located in Northeastern Wisconsin.  Mary Jane recalls the revolution in her workplace that occurred with the purchase of the first computer in 1987.

Mary Jane has twice served on the editorial board of Voyageur magazine, has facilitated placing more than 250 buildings on the National Register of Historical Places, and has been the coordinator for 26 years of a local history series sponsored by the Library.  Of the more than 400 speakers who have participated, she recalls David Marniss who wrote a book on Vince Lombardi, When Pride Still Mattered, as one of the most memorable.  Another highlight of her career was the creation of a 10-day long “Heritage Festival” in 1984 in celebration of the 350th anniversary of the arrival to this area of French explorer, Jean Nicolet.  The creation of “The Paper Wall Project” produced for “LZ Lambeau”, in which 1244 Wisconsin casualties of the Viet Nam War were commemorated, is something she was honored to have produced. Thousands of veterans who served our country with courage and honor shed tears as they bonded and reminisced at the Paper Wall.  Having rallied librarians from throughout the state to submit the names of those who gave their lives in Viet Nam, this exhibit traveled around the state to several locations in 2010.

In 1986, Ms. Herber graduated from Leadership Green Bay. She is a recipient of the Leo Frigo Leadership Award.  She has served the Green Bay community by holding a variety of positions on boards of the Brown County Historical Society, City of De Pere Historic Preservation Commission, the Green Bay & De Pere Antiquarian Society, the De Pere Historical Society, Heritage Hill Guild, and the National Railroad Museum.  Mary Jane has served on the board of the Wisconsin State Genealogical Society for close to 40 years.  Her classes in Genealogy 101 offered at the Brown Co. Library, have helped hundreds of people search and compile family histories for future generations.  She currently edits a weekly column for the Green Bay Press Gazette entitled, “Reflections of the Past”.

When asked, “What message or advice would she like to pass on?”, she replied, “If you live in a community, you have to participate, volunteer, and give back to the community.”

On her nomination for Dreamers and Doers form it states, “Mary Jane is a “dreamer” about how to preserve our rich heritage and a “doer” on a daily basis to help the community understand the rich cultural, historical heritage of Wisconsin.”  Also stated, “You might say she’s on a first-name basis with all the Dreamers and Doers of the past because she’s with them from morning to night, figuratively speaking, as she does research for the parade of people who flow in and out of her niche [at the Central Library] daily.”