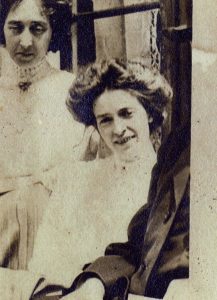 Jesse (Hurlbut) Buchanan truly had an ambitious goal: she wanted to make Green Bay the American center of history and culture. If the community did not attain that distinction, it was not from a lack of effort on Buchanan’s part. Buchanan was tireless in advocating historical preservation in the area and “did much to preserve…. early treasures”.

In 1915, she founded the Green Bay Art Club along with eight other women to assure that art and culture would be part of the local community. That same year, they organized a one-week exhibit of historically significant objects in the basement of the original library at the northeast corner of Jefferson and Doty streets.

The exhibit was so popular that the women decided a permanent museum was needed. With others, they incorporated, as the board of the new Green Bay Public Museum with a mission of “bringing the world” to Green Bay. Jesse served as chairperson of that board from 1920—1922.

She founded the Green Bay & De Pere Antiquarian Society in 1923. Today’s members continue the pursuit and restoration of original or period authentic furnishings for area museums. In 1998, the society established the Jesse Buchanan Fund for the unbudgeted purchase and/or restoration of historical artifacts that unexpectedly come up for sale. In 2007, such a sale became a reality when the Brown County Library Board of Directors decided to sell assets that were part of the library’s collection. The Society initiated a $1.3 million dollar community –wide campaign “Save our Cultural Heritage” to ensure that the community’s cultural assets which have national significance be retained and preserved locally for current and future generations. The campaign was a success. The collection, owned by the Society is placed for safe keeping at the Neville Public Museum. Several works of art are currently placed in the community and available for public viewing. The Society continues its efforts for the restoration and conservation of this important collection and to meet the needs of other local museums through annual Antique Shows and other fundraisers, as well as, seeking bequeaths and donations.

Buchanan was also appointed regent of Tank Cottage and Fort Howard hospital by the city of Green Bay. She undertook the buildings’ restoration. According to local legend, when Buchanan learned Chicago collectors were buying up Green Bay artifacts, she was livid. Determined to put a stop to it she systematic searched for historically accurate artifacts for the area’s historic landmarks. She also sparked the campaign to refurbish Cotton House.  All three buildings now are located at Heritage Hill State Historical Park.

Buchanan ran an antiques store.  That effort, often supplemented with loans or donations from her own collection and coffers, helped refurbish many area museums. The shop also connected her with antique dealers across the country and who aided her quest for authentic furnishings.

Her preservation zeal touched other communities, as well. Buchanan often stated in her endeavors “there is always one right way to do things”.

The Historic Indian Agency House in Portage, WI contains a room Buchanan helped furnish with funding from the Antiquarian Society. The U.S. government had built the house in 1832 for John Kinzie, the Indian agent to the Winnebago.

Closer to home, Buchanan encouraged the Oconto County Historical Society to acquire and preserve the Beyer Home in 1940. This restored and refurbished house now is open to the public as a museum. When Wisconsin celebrated its centennial anniversary in 1948, the State Fair exhibited a territorial bedroom from 1836. Credit Buchanan, who gathered the antique furnishings and decorated the room.

Anything fostering Green Bay as a cultural mecca, aroused Buchanan’s passion. Her own home was furnished with art objects from around the world, the result of extensive travels. She lived at 936 South Monroe Avenue, just north of Morgan L Martin’s territorial home (now Hazelwood Museum). Buchanan was a close friend of Deborah and Sara Martin and later bought many of the artifacts from the Martin home.

Buchanan joined Deborah Martin, Arthur and Ella Neville, May Beaumont and others in asking the Kellogg Public Library board for museum space in the library’s basement. It was there that the Neville Public Museum had its beginnings. Buchanan was also an early member of the Green Bay Park Board and chaired the City Beautiful Committee of the Green Bay Woman’s Club for many years. She helped organized Green Bay’s first Little Theater, also supervising costumes and stage settings. She also was state chair of the Fine Arts Department of the Federations of Women’s Clubs.

The Women’s Auxiliary of the State Historical Society cited Buchanan shortly before she died for her patriotic and historical work. The French government recognized the Green Bay native for her Red Cross work during World War I, although the specifics of her contribution are not available.

The daughter of pioneer businessman Frederick Hurlbut, Jesse Buchanan was married to Dr. R.C. Buchanan in 1899. The couple had no children. She died December 27, 1950 at the age of 73 and is buried in Woodlawn Cemetery, next to her husband who died in 1948.