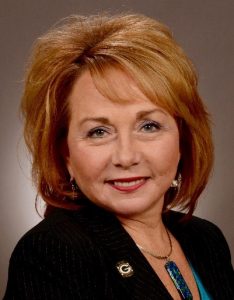 Kathy Hinkfuss was born in 1963 and raised in Brown County.  She grew up in West De Pere.  Her father is a retired Journeyman Electrician and her mother was a homemaker.    She was very active during her teenage years in 4-H, competing every year at the Brown County Fair in gardening, sewing, and art.  Through her family, she learned the value of hard work.  She started waitressing at 14 and worked two shifts at Mc Donald’s during her Junior and Senior year of High School. Kathy graduated from West De Pere High School and attended NWTC for Practical Nursing.

Using her back ground as an LPN, she began her 20-year career with Humana as a Claims Processor in 1985. While working full-time at Humana, Kathy earned her bachelor’s degree in business management from Silver Lake college (1991).  Wearing many hats and developing her skills, she ultimately became the vice president of National Service Operations.  As a VP she managed a $170 million budget and 5,000 employees. She and her team were recognized nationally for their commitment to service and their customers.

Kathy joined Associated Financial Group (AFG) as a VP and Consultant for Health Care Benefits, in 2005, so she could stay in Green Bay. She was named Rookie of the Year and was one of the top three sales consultants.

Then in 2011, fulfilling her desire to serve her community, Kathy became the CEO for the YWCA Greater Green Bay. During her time with the YWCA, she completed a $3.3 million Capital Campaign and opened the Women’s Empowerment Center offering Family GED Classes and work-force training.   In early, 2016 after three years of teamwork, the YWCA Childcare and Learning Center achieved the highly coveted National Accreditation (NAEYC) – 5 Stars under her leadership.   She also enhanced the YW programming and helped community members in need, by developing partnerships with Beacon House, Literacy Green Bay, NWTC, the Multicultural Center, the Hispanic Resource Center, Howe Resource Center and Big Brothers Big Sisters.

Kathy earned the Masters in Business Administration from UW-Oshkosh in 2014.  Kathy is also a first-generation college graduate. Kathy always strives to find community solutions for issues that catch women and children in the cycle of poverty.  Kathy learned more about community issues when she joined Leadership Green Bay, class of 1989-1990.  This program is a nine-month, community-based, experiential learning leadership program developed by the Green Bay Chamber of Commerce.  After completion of the program, Kathy became the chair of the Leadership Green Bay Alumni Board.  Kathy has also served on the Children’s Museum Board, the Chamber of Commerce and The Girls Scouts of North Eastern WI.

Kathy currently serves as a member of the Redevelopment Authority of the City of  Green Bay and is treasurer of the Art Garage Board of Directors.

Kathy always says the devil is in the detail.  She learned early the importance of knowledge and the ability to get a team of people on the same page.  She always said – Do your homework and be ready to provide your thoughts.  It takes a team of knowledge and perspective to move the needle.

She and Tim are very proud of their children, Madeline (26), Marie (23) and Michael (22).  Each on their journeys into adulthood.

Kathy’s passion for helping our community to solve its problems through her professional and volunteer work is a lasting benefit to Green Bay.  She is especially focused on shaping the future of women, children and their families for a better Green Bay.