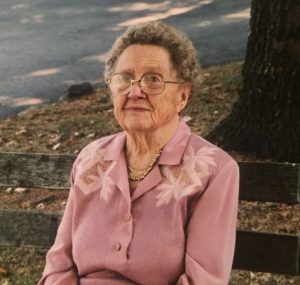 Noella M. Stenger was born in Green Bay, WI on December 26, 1906 and died only four days short of her 108th birthday on December 22nd, 2014. She was the mother of six children, a teacher, dental assistant and a lover of the arts, music and the outdoors.

It would have come as quite the surprise to many of the people that Ms. Stenger knew as a young girl, that she would live to be 107 years old because “when she was seven years old, she was ill and skinny, far to thin too be the daughter of a butcher.” This is what the elders of the city thought. In order to help her improve her health, she was sent to a new outdoor school program at Howe school.

This program was attributed to how Noella ended up becoming active for nearly her entire life. She stayed active throughout the entire year. In the wintertime she skied, snowshoed and ice skated. During the warmer months she sailed, canoed, kept a garden, fished, hunted, picked berries and enjoyed observing nature. She was a skilled cook and was known to be able to cook any type of wild game. She drove until she was 97 years old and sailed, fished, played bridge, and canoed until she was well over a hundred years old. She enjoyed nature and being outside up to her last days. When she could no longer participate in the outdoor activities, she still enjoyed sitting outside.

In 1935, when Ms. Stenger was 29 years old, she married Dr. George F. Howlett. DDS. They had six children together. Noella sometimes helped her husband, as a dental assistant. Together, they raised their children to love the outdoors. One of their sons, even went on to become a professional outdoorsmen and outdoor sciences researcher.

Howlett enjoyed the performing arts. In high school and college, Howlett acted in plays.  She played the piano and her husband took opera lessons. Her children recall listening to both of them. They would listen to classical records and famous opera singers on their wind-up record player. Sometimes their mother would record the opera on a wire recorder, later a tape recorder. Dr. George passed away in 1991. Noella continued to stay active in the community after her husband died. She enjoyed going to programs at the Brown County Library, Weidner Center and Green Bay Civic Symphony. She tutored Vietnamese immigrants in English. Her background in French made her an ideal tutor, because many of the Vietnamese spoke French.

Howlett was a devout Catholic and attended mass every day until late in her life. She saw that all her children had a Catholic education.

Noella Howlett made many contributions to her community, living an active and fulfilling life up until her final years.